How to Build a Temple

I have departed from the common lectionary for this sermon in order to continue to address the current period of trqnsition between clergy settlements.

Haggai had one of the shortest ministries and wrote one of the shortest books in the Bible (two chapters, 37 verses). In spite of Haggai’s small size, the story told in the book is a pivotal one. It was Haggai, along with his contemporary, Zechariah, who talked Governor Zerubbabel and the High Priest, Joshua, into rebuilding the temple; something that changed the tone and climate of Israel for generations.

The Israelite exiles, recently released from decades of captivity in Babylon, were dismayed at what they saw when they returned home Babylon. Everything was flattened. They had expected to come back home to their beloved land of ‘milk and honey’, but what they saw was rubble and weeds. And, among inevitable chores of farming and not starving, they came back with explicit orders to rebuild the temple.

The return home was, in the beginning, a time of great promise and excitement, but, whether by despair or exhaustion, they spent two years doing nothing on the temple, and little to rebuild the society they had left behind. They barely scratched out a living, and hardly moved forward on any big projects; symptoms of a depressed people. Finally along came Haggai, who said things will never get better until you start rebuilding the destroyed temple, the main message of chapter one, and so they did.

The two leaders of the new Judah, Zerubbabel, the governor, and Joshua, the high priest, had actually been appointed by King Darius of the Persian empire to rebuild the temple when they got back to Jerusalem, but they never did it. The best guess is that they thought the people of Judah were just too demoralised and couldn’t get themselves together. That’s why Haggai’s ministry was so important. There are indications that some work had actually begun on the Temple, but evidently it was not much and it eventually stopped.

When Haggai took God’s message to Zerubbabel and Joshua, they were resistant. God says of them, “These people say the time has not yet come to rebuild the lord’s house” (Hag 1:2). But God speaking to them through Haggai is not above doing a little shaming: “Is it a time for you yourselves to live in your panelled houses, while this house lies in ruins?”; and using a few threats: “the heavens above you have withheld the dew, and the earth has withheld its produce. And I have called for a drought on the land and the hills.” (Hag 1:10–11). And so, with their  spirits “stirred up,”  they went to work. In 353 BC, it was finished.

Consider the rebuilding of the temple in Jerusalem an analogy for rebuilding the congregations here.

Though the second temple was completed,  it clearly did not have the magnificence of the first temple built by Solomon in Israel’s heyday; they had neither the funds nor the workers nor possibly the emotional energy to build it back to that level. They were clearly distressed and depressed when they saw what they were able to create, because this new Temple was just a shell of what the old one was. The old one was a grand pinnacle of Israel’s glory at its height, and in comparison, the new one looked but a pale shadow.

It’s true that the first one had been built with vastly larger numbers of people and at a time when Israel had much more wealth, the second by fewer people and fewer resources, so it was inevitable from the start that it would be less grand. A negative comparison was also inevitable, and they were saddened by it. After they worked and worked to rebuild it, the result made the old timers with long memories weep.  Ezra wrote of this time:

“But many of the priests and Levites and heads of families, old people who had seen the first house on its foundations, wept with a loud voice when they saw this house, though many shouted aloud for joy, so that the people could not distinguish the sound of the joyful shout from the sound of the people’s weeping, for the people shouted so loudly that the sound was heard far away.” (Ezra 3:11-12).

It is the weepers who are Haggai’s main audience when he says with sympathy, “Is it not now in your sight as nothing?” Nehemiah’s account of the scene says that outsiders looked at the frail walls they were building and laughed.

But Haggai, speaking for God, challenged both those who cheered and those who cried to be courageous because God is, in fact, still with them. The journey is not over:

It’s interesting to note that there are 101 verses in the Bible that contain the phrase “Do not fear” (or “fear not”). It is a bedrock call from Yahweh. It was given to Abram in the beginning of the biblical story (Gen 15. 1) and Zechariah at the end (Zech 8. 13, 15). In Haggai, it promises that “from the poverty, despair, and factionalism of the restored people of the land, the Lord promises deliverance.”  This is the most comforting line in the passage, and is our jumping-off point

At the end of the reading, Haggai, speaking for God, promises that when the temple is built then people and riches will return to it:

“I will shake all the nations, so that the treasure of all nations shall come, and I will fill this house with splendour… The latter splendour of this house shall be greater than the former…and in this place I will give peace….”(2:7-9).

What does it mean to people who were torn over which way to go and were on the brink of immobility and collapse? The older people knew that the temple (i.e. church) had once been huge and important in Jerusalem. They remembered its glory years.

You remember glory years in your church life, too: when the choir had forty members and the youth group had fifty; when everybody went to church, and reservations had to be made in advance to get a seat at the church dinners. There were two pastors back in those days and a full time music director, youth director, and Christian Ed director. Or in the case of Ocean Grove, you only have to go back less than 30 years to a time when there was real concern about losing potential new members because they were having a hard time finding a seat at worship.

And so the people of Haggai’s Israel are faced with the task of building the temple back up again, and the task is daunting. They only had a part time priest, and a volunteer mother with three kids doing Christian Ed. It’s easy for depressed people in the centre of the crisis to say it just can’t be done.

The historical evidence is scant, but it seems there were two groups in Judah who were active in the discussions about rebuilding. The first were those who were older and had more power and influence, and remembered the Temple in its early glory. They said that if we just act like we did back when it was a big and important place, then all would be well. If we made sacrificial offerings the old way, did ritual the old way, dressed the old way, then somehow all of those people who had moved on, changed and become indifferent today would just come back again and act like they did back when we were young.

The second group was younger, and they had never seen the Temple when it was such a glorious place. These people said the new temple needed to be a new kind of place with a new ministry and have a new mission. They said that it didn’t need to be the huge building that it used to be, but it could be lean and mean and directed towards meeting needs of a new world in a new way.

That’s the significance of the two groups mentioned by Haggai, those who cried and those who cheered. The old cried because it wouldn’t be the Temple of their past and the young cheered because it had the potential of being the new Temple of their new future. No doubt you can identify yourself as leaning toward one or the other as you look at the future of this congregation.

“Which side ‘won’?” you may ask. The answer to that question is not clear. This is where we are now in Ocean Grove/Barwon Heads. We come at the task of setting the future course of this congregation with all levels of enthusiasm: we want to ‘build the temple,’ we want to do ministry, and grand ideas are floated, but then we are slapped in the face by reality. The work load is daunting, our resources are minimal, and our energy has to be parcelled out to a dozen other tasks. What do we do?

For Haggai, in the end, it was never really about the Temple per se, the building. It was really about the work that was symbolised by the building. God says, ‘do the work, and I will always be with you,’ and this was the real point. He said, do it “according to the promise I made to you when you came out of Egypt,” back when they had no building whatsoever. “My spirit abides among you, do not fear” (v. 5). This is the true and final message. ‘Do the work,’ he says, ‘build the building,’ but know that, whatever happens, I will be there; do not have fear. And then, at the end of the day, “The latter splendour of this house shall be greater than the former…and in this place I will give shalom, peace.”

We are living in a Haggai era. We are a people with widely, and wildly, varying expectations of what a church is supposed to do and be, and with not nearly enough resources to fulfil half of them. But at the end of the day, church and ministry and the realm of God on earth is not about budgets and buildings and memberships and planned giving. It was and is and always will be about creating a community in which people feel the presence of God in their midst, lifting, enabling, empowering, and redeeming their lives and the lives of others. If we can do that, then God’s ‘House’ will be rebuilt and revived and revised and reformed, and it will be a beacon to outsiders and will beckon to others. If we are unable to do that, then we might as well join those Israelites who moved to Samaria and started another religion. 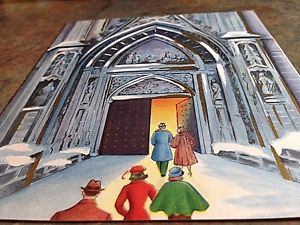